Spectrum offers three internet-only plans in the Los Angeles area, ranging from 300 Mbps download up to the 1,000 Mbps gigabit range.

Promotional pricing starts at $49.99 per month for standard internet-only. Internet pricing as low as $44.99 is possible if you call in to bundle TV or phone service.

The base plan, Spectrum Internet, is by far the most common choice in the LA area. The 300 Mbps speed supports normal use like HD streaming (Netflix), video calls, and gaming for homes of up to four people.

Pricing may vary by location. To find the best price available at your address, call (833) 438-1038 for an address check.

Spectrum is the most widely available internet provider in the Los Angeles area, with 98% of the city already wired for their internet plans and cable packages in 2023.

Los Angeles is an “upgrade” service area for Spectrum, meaning that their base plan speed has been upgraded to 300 Mbps as of 2023.

Spectrum’s plans go all the way up to gigabit download speed in LA. However, the majority of customers are best served by the base tier plan, which is more than good enough to support streaming video, gaming, and up to five or so users. 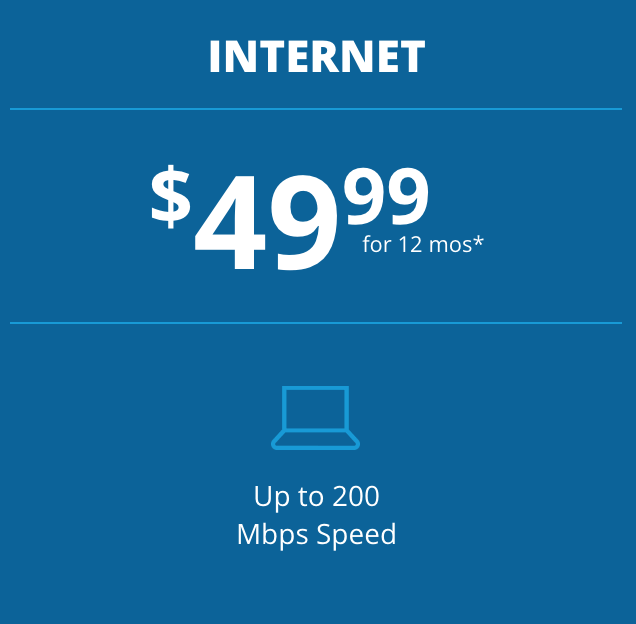 We currently recommend the base Spectrum 300 Mbps internet-only plan for most households in the Los Angeles area.

The 300 Mbps download speed is more than enough for a household of 2–4 people to use at the same time, and can support HD and 4K video to widescreens for streaming. The main caveat of this plan is the 10 Mbps upload speed; if you have multiple people running video calls at the same time throughout the day, you should consider upgrading to the Spectrum Ultra plan which brings the upload speed to 20 Mbps.

The 300 Mbps internet-only plan is currently available for phone orders at a discounted rate of $49.99 for the first year. After the first year, the promotion ends and the price increases $30 to $79.99 per month. However, you can often get the discounted price extended by calling in to request it.

They charge a $5/month fee for WiFi, which can be removed if you use your own router. Other than the WiFi fee, there are no additional fees for internet-only service; taxes and fees are all included in the $49.99/month price.

Spectrum’s Ultra and GIG upgrades are best for “power users” with home offices, multiple 4K screens and more than four hours per day of TV viewing time, and serious gamers.

The spectrum standard 300 Mbps plan is best for homes with 1–3 users who primarily use the internet for entertainment.

The Spectrum Ultra plan offers 500 Mbps in LA, making it best for homes with 2–5 users, with 1–2 people working from home.

The Spectrum Gig plan is intended for power users, and is best suited to large households of 5+ people or home offices.

Spectrum Ultra is worth considering for LA households that need extra downstream bandwidth for streaming 4K to multiple screens in the home.

Overall, it’s a good fit for larger family homes for this reason, particularly if paired with an upgraded mesh router system to reduce the coverage issues many users report from Spectrum’s hardware defaults. The 20 Mbps upload speed is still a bit challenging for home office use (video calls, etc), but is twice as much as the paltry 10 Mbps offered by their base plan.

Spectrum GIG is the only plan that offers broadband-grade upload bandwidth, which makes a big difference if you work from home. For those of us in Los Angeles who work in the content industry and regularly work with large video files, the difference between 10 Mbps upload and 35 Mbps upload is huge.

Spectrum TV is very standard as cable packages go: the price is low and reasonable compared with the main competitors in Los Angeles, which are “AT&T TV” or DirecTV.

Spectrum TV can be purchased alone, but it doesn’t really make sense to do so — so the pricing below is for their internet + TV cable bundles, which come in 4 tiers:

Spectrum’s TV offerings in Los Angeles are contract free, which is another benefit that makes it a strong competition for AT&T. (surprisingly, AT&T still requires a contract for TV service.)

As with any cable plan, they come with a variety of fees though — ranging from DVR leasing fees to regional sports fees to a line item for every receiver in the home. This can bring the cost up, but still not nearly as high as competing offers from AT&T.

Spectrum offers self-install options for customers in units that have already has Spectrum service. This is the simplest way to shave cost off your first month of service, and is actually the default when you sign up by phone.

When you select self-install, they will mail you a kit including the router, modem, and wires needed to set up your home Wi-Fi. The kit comes with simple step-by-step instructions and is not difficult to use.

When you unpack it, it’ll looks something like this:

If you’re more technically-inclined, you can reduce the bill even further by opting to use your own router altogether.

The router costs $5 per month on most Spectrum plans other than Gig. While it’s only $60 annually, it adds up to a lot over time for long-term customers. Purchasing your own will cost around $100, but saves money if you’re planning to use your Spectrum plan for longer than a couple years.

I’ve written up a full guide on the process to setting up your own Spectrum-approved Wi-Fi router here.

For low-income households, Spectrum offers internet access at a reduced rate. However, the speeds are much lower than their consumer-facing plan tiers, and you will need to go through a lengthy application process in order to demonstrate qualification for the subsidized pricing.

Compared with other cheap internet options in Los Angeles, Spectrum is faster but not as affordable as competitors like AT&T.

Keep in mind that even their subsidy plan requires an additional fee for the WiFi router — the fee is $5/month as of 2023.

What is the cheapest Spectrum internet deal in Los Angeles?

The cheapest Spectrum offer above 100 Mbps is their $49.99 per month 300 Mbps internet plan. They offer some slower-speed plans at lower tiers, however they require low-income verification to qualify.

Does Spectrum have senior discounts in Los Angeles?

In Los Angeles, Spectrum commonly offers extended discounts to customers once their first year promotion expires. As of 2023 they apply the promotion automatically for year two, and in year three you can call and request it be added back. While time consuming, Spectrum is flexible about discounts in Los Angeles because there is strong competition from AT&T Fiber and Starry Internet locally.