Is the Xfinity Gigabit Plan Worth It?

Xfinity Gigabit is the second-fastest internet-only plan available from Xfinity in most of their coverage area. At a price of $93 per month after promotions, it’s also one of the most expensive.

This means that the upload speed of Xfinity Gigabit is about 40 times slower than the download speed.

Despite the limited upload speed, Gigabit will run you around $1,416 per year once the new-customer discounts expires — assuming you want the xFi complete package for unlimited data. (There’s little point to this plan with a data cap, and I’m surprised it’s even the default in 2023.)

Compare this with the $792 annual cost of service + WiFi equipment with the entry-level Xfinity 75 Mbps plan, and it starts getting hard to justify.

There are a few situations where it’s worth it, but most customers will get a similar experience from one of the mid-range plans like Superfast.

Here’s a breakdown on speed and pricing for all current Xfinity plans, starting with Gigabit Extra and walking back towards the slower basic service options:

As you can see, Xfinity’s main strength is reasonable pricing on the mid-low-end plans. Once you get into the “pro” plans, the pricing gets high considering they charge an extra $25 per month if you want unlimited data.

Outside the US Northeast regions, Xfinity caps most plans at 1.2 TB, and this will be extended in states like New York and Connecticut starting in July 2021.

Xfinity Gigabit requires a one-year contract in order to get the lower $75 per month promo price. If you don't want to sign a year contract, you can get month-to-month service with no contract, but it voids the new customer promotion, meaning you'll pay $93 per month starting on day one, rather than after the first year of service. Breaking the contract incurs a fee, which is $110 if you cancel in the second month and decreases by $10 each month over the first year. During the first month, you are allowed to cancel with no fee if you have an issue or don't like the service.

Here’s how those rates of Xfinity Gigabit compare with the fastest plan option, Gigabit Extra.

Note that these are internet-only service rates and do not include the WiFi equipment fee, or any additional data fees. 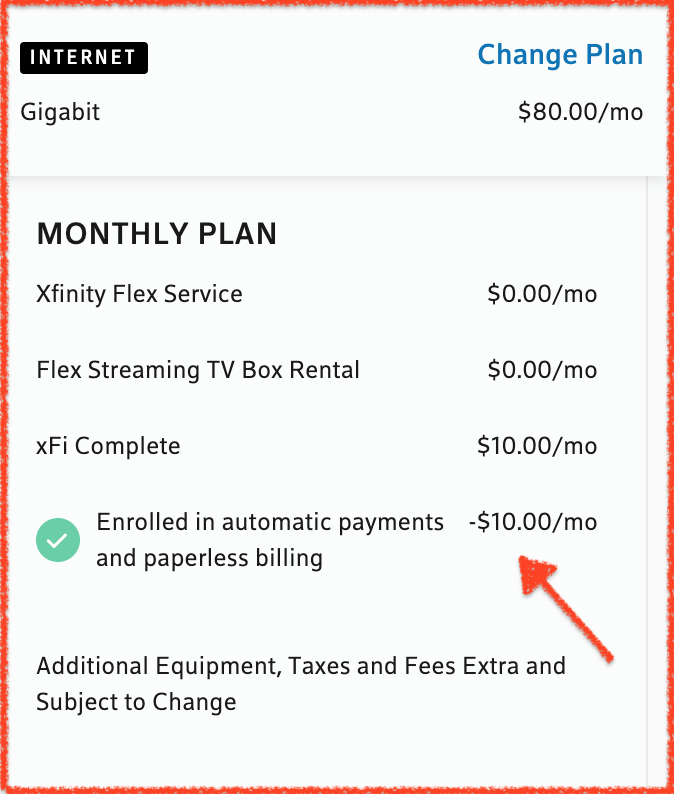 While running test orders to prepare this page, I found that some actions you take in checkout will trigger the router price to discount to $0 for the first year, or just $10 for unlimited data and the xFi Complete WiFi package. If you don't see a price lower than $14 when you sign up online, try engaging with the chat in bottom left of the screen to ask about price reduction for the router.

Like all Xfinity cable internet plans, Gigabit gives you three options when it comes to WiFi:

Xfinity pushes the xFi devices because it ties you into their larger “cinematic universe” of xFi TV, smart home, and security products. They’ll even offer WiFi-connected security cameras during checkout! It’s an interesting strategy, and worth considering if you are a smart home fan.

Gigabit internet is really only useful for homes that do an abnormally high amount of concurrent streaming. If you have more than two 4K TV screens and you’re watching content on them using a Roku or similar streaming device, there’s a case to be made for Gigabit. However, given you only need 15 Mbps or so of bandwidth to support each stream, it’s overkill unless you’re sharing the connection with dozens of smart home devices, laptops, phones, and a few kids or roommates who do lots of screentime.

As discussed above, the main benefit of Xfinity’s gigabit plan specifically really isn’t the gigabit downloads; it’s the 35 Mbps upload rate, which is more than double any other plan they offer.

The second-fastest 600 Mbps plan only saves you $10 per month, and right away they reduce the upload speed to 15 Mbps.

In terms of download, most homes don’t use more than 100–200 Mbps max at any given time. A cloud-connected camera only needs 2 Mbps or so for uploads, another couple for a video call here and there, etc.

Summary: Xfinity Gigabit is too expensive for the average user

To summarize, Xfinity Gigabit is good if you have a large household and home office setup, but will be a minor performance increase for the average home. If you have fewer than four people using the internet and you don’t have a special upload-intensive use case like streaming Twitch or running a YouTube channel in mind, I’d recomend you opt for a lower plan and only upgrade if you run into regular bandwith issues.

Does Xfinity Gigabit internet make a difference for gaming?

Xfinity's gigabit internet plan won't make a noticeable difference in terms of download, since most games require no more than 10 Mbps even when streamed from a platform like Stadia. However, the 35 Mbps upload speed of Xfinity Gigabit is more than five times their base plan, and can make a difference for gaming if you have multiple users sharing the upstream bandwidth in your home.

What is the upload speed of the Xfinity Gigabit plan?

Xfinity Gigabit offers a 25 Mbps upload speed. While this sounds low for a gig plan, it's actually more than twice as fast as their mid-tier plans and five times faster than their basic plans.

Does the Xfinity Gigabit plan have a data cap?